The system was developed approximately within the same era as the well known W.E Fairbairn fighting system Defendu.

However unlike Defendu MCS was not made widely available but only to a small  group of covert forces who deployed around the 1950 to 1960’s. Since the number of operatives were small there are now very few people left still around with experience of the system. Two of the MCS instructors are 1st generation students which means they received their training direct from those who had been part of the original group and had first-hand experiences of using the system in real conflict situations.

Pete Robins, until his untimely death, was widely regarded, the foremost historian of W.E Fairbairn and saw some links between Fairbairn’s military postings at the time and with the area of active operations of the MCS taught groups. Although this was true the two systems are very different so we cannot corroborate any connection there may have been. 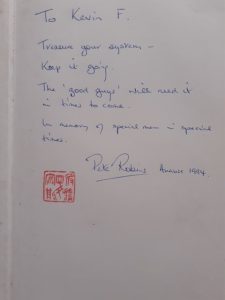 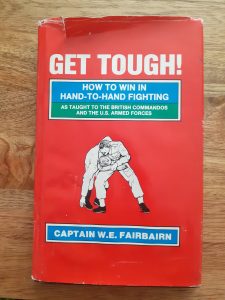 Pete Robins, a true gentleman and one of combatives legends. He kindly signed and notated our copy of Get Tough!

Due to the Covid-19 outbreak all seminars and team training have been postponed until further notice.

Keep yourself and loved ones safe. Continue your training at home as much as possible.